McCain wants to drill in the Great Lakes 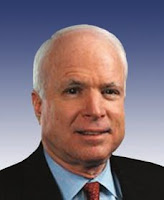 How would some nice oil platforms look sitting just off the shore of Lake Erie? That would be a great sight looking north from the Rock and Roll Hall of Fame, eh? Sen. John McCain's support for offshore oil drilling is primed to become a campaign issue. In a letter to McCain, Rep. Rahm Emanuel of Chicago asks McCain to "clarify" his position on drilling in the Great Lakes, which, Emanuel, who obviously passed geography in high school points out, are bordered by Illinois, Indiana, Michigan, Minnesota, New York, Ohio, Pennsylvania and Wisconsin. "As you are undoubtedly aware, in 2005 a bipartisan majority in Congress enacted a permanent ban on drilling for oil and gas in the Great Lakes," Emanuel wrote. "Drilling in the Great Lakes would adversely affect millions of Americans in the eight states that border these lakes, further endanger the ecological web and threaten the beauty of our shores." McCain has come out in support of offshore drilling -- a flip flop on his previous position -- and most experts agree it would do nothing to help oil and gas prices for at least 20 years.
For my money, if anything goes offshore, let's do a forest of wind turbines.