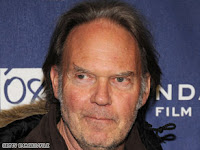 Rocker Neil Young sometimes puts down his acoustic guitar and goes electric, more often than not with his band Crazy Horse. But now, Young is finding another way to go electric. He has teamed up with Johnathan Goodwin, a Wichita mechanic who has developed a national reputation for re-engineering the power units of big cars to get more horsepower but use less fuel. The two are looking to convert Young's 1959 Lincoln Continental convertible to operate on an electric battery. Ultimately, they said, they want the Continental to provide a model for the world's first affordable mass-produced electric-powered automobile. General Motors may have killed the electric car, according to an amazing documentary, but Young is trying to bring it back. Read the entire article here.