I have some good news!

It's time everyone got to know more about the Good News Network. It's mission is to provide a "Daily Dose of News to Enthuse." The Good News Network is a clearinghouse for the gathering and dissemination of positive news stories from around the globe. Daily stories will confirm what we already believe — that good news itself is not in short supply; the advertising of it is. Negative news is an important staple of any well-informed citizenry and necessary for society's evolution. But, today we are in dire need of a well-balanced media diet. Local TV news, especially, has been continually feeding us junk food. We need to be informed by a world view that is not dripping with sensationalism and attuned to the police scanner. Let's start looking up! Check on the Good News Network today.

“What is opportunity, and when does it knock? It never knocks. You can wait a whole lifetime, listening, hoping, and you will hear no knocking. None at all. You are opportunity, and you must knock on the door leading to your destiny. You prepare yourself to recognize opportunity, to pursue and seize opportunity as you develop the strength of your personality, and build a self-image with which you are able to live with your self-respect alive and growing.” 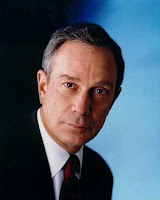 An article in the Christian Science Monitor reports that in an effort to curb waste and generate revenue, New York Mayor Michael Bloomberg has called for a 6-cent fee for every plastic shopping bag given to shoppers. Under the proposal, for each bag, 1 cent would go to the retailer and 5 cents would go to the city. Officials estimate that the surcharge could bring in $16 million a year, offering a revenue boost to a city that faces a $4 billion deficit over the next two years.The surcharge is technically considered a fee, not a tax, so it needs only to be approved by New York’s City Council, not the state legislature. While this is considered a lower hurdle, the proposal’s passage is by no means assured, according to The New York Times.